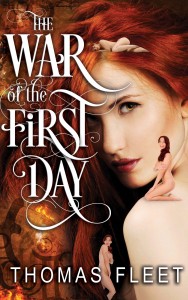 Two days ago the King of the southern lands invaded the witch lands.

This morning a traitorous witch, who urged the King to start the war, killed two thirds of all the witches in the world. She and her followers are hell-bent on exterminating the rest.

At first it seems that Reeva, the leader of the traitors, wants to rule the witch lands…

Until Lilta learns that Reeva’s goal is not power.

It’s not that either.

But whatever Reeva’s goal, it involves the approaching Day of All Centuries, a magical day on which anything can happen. If the traitors can use the Day’s power, there’s nothing they won’t be able to do.

Meanwhile Lilta’s mistress Apandra, distracted with the fighting, fails to notice Lilta’s growing magical knowledge. As the war reaches a crisis point Lilta discovers new magic that might defeat their enemies, but the risks are terrible. Apandra forbids her from attempting it, and Lilta must decide if she dares to oppose her own mistress before everything she holds dear is destroyed.

[A] rollicking, fast-paced adult fantasy novel… There are a lot of twists and turns…

[The heroine,] caught up in a complex web of betrayal… must embrace her own magical powers and make decisions to act independently, risking not only her own life but potentially much, much more.

This is a world of political rivalries, where characters jostle for power and will go to any length to obtain it: it just happens to be one where magic is the chief weapon in use.

– Marian Thorpe,
The War of the First Day, by Thomas Fleet: A Review

Fantasy with a difference.

The story is told through the first person point of view of an aspirant witch caught up in a civil war among her sisters… I found them all, mostly women, to be utterly credible… They are drawn with consistency and made real by their desires, hopes, dreams and mistakes.

Having not read a book similar to this, I can’t compare it with another. But I can say I enjoyed it and I’m sure many readers of fantasy will discover this is a good read. It isn’t a book that fits easily into a subgenre, and that suits me fine.

Read the first few chapters free at Barnes and Noble.

Or at Amazon.
Note: Amazon’s “look inside the book” feature is wonky in Microsoft Explorer for Kindle editions. Other browsers (e.g. Firefox and Epic) work fine.

With the baby Prince in my arms I darted past the guards. Since I’d called upon speed I was a blur barely identifiable as human to them. But already I felt the magic weakening me…